Had a relaxing break at Dom and Anna’s. Went for a lovely walk on Ilkley moor yesterday – very nice to walk up a hill without pushing a bike!

We knew it was a long ride today with lots of hills at the beginning so after a last cuddle with Evelyn we left in good time. It was drizzling but not too wet. 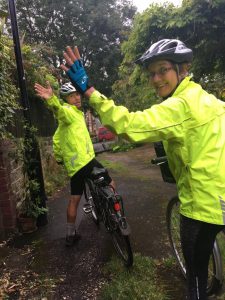 Angie and Malc (Anna’s Mum and Dad) had very kindly offered to take our bags to our destination in Aldwark so we had much less weight than usual. This made the hills easier and we only had to push the bikes uphill once all day. Thank you Angie and Malc!

We had a trouble-free journey out of Leeds and got to Collingham as the church clock struck ten.  Here we met up with Geoff and Susan who were going to keep us company for the next leg.

When we planned our route earlier in the year, we hoped to cross the Wharfe at Linton but the bridge was damaged in the floods of 2015 and is still not open. This meant the four of us had to cycle along the A58 to Wetherby.  We managed to ride on the pavement but it was still rather alarming as the traffic roared past.

After this it all got easier. We briefly followed NCR 665 on an old rail track then a new cycle track to Walton. From there we headed due North on a Roman road. It was quite busy with fast moving traffic but we sped along and stopped for lunch only a few miles from Aldwark. 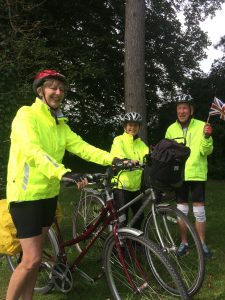 when Susan noticed she had a puncture: 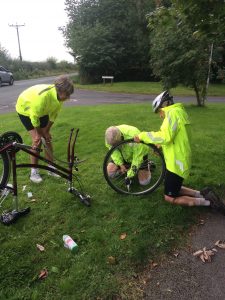 How many dayglo cyclists does it take to mend a puncture?

Once all the technical problems had been addressed, debated and solved we set off again, crossed the River Ouse on a wooden toll bridge (free to cyclists) and still got here in good time. 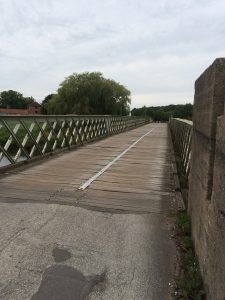 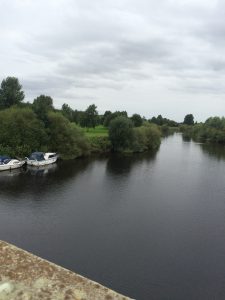 We will be  continuing through the Vale of York tomorrow to the little village of Felixkirk.